Welcome to part three of “Operation: Thanksgiving,” your guide and my spin on that holiday that will pack your digestive tract tighter than the overhead luggage on an over-booked flight home. Last time around, I got into some cultural history about the holiday and how the goofy-looking turkey went from being domesticated by ancient peoples to carved by modern man (or woman) for an autumn holiday sandwiched between the garish, sugar rush of Halloween and the cold, yet heartwarming lull of Christmas (or Hanukkah, if you’re Jewish, Ramadan, if you’re Muslim, or no holiday if you’re Jehovah’s Witness, Buddhist, Hindu, atheist, or you’ve long given up on holiday cheer and want everyone else to know it).

Today, we’re going after the popular dishes of Thanksgiving, specifically, some subsitutes, new spins, and the right way to cook dishes you can’t do without…which means, “Yes, we will discuss how to make that turkey come out a little less dry so your critical relatives can get off your damn back,” which is the subject of today’s post.

Now, cooking for large crowds (what’s known in the foodservice biz as “high-volume service,” whether you’re serving the cream of the social crop at a fine-dining restaurant or serving the unfortunate souls who have to make due with soup from a homeless shelter. I’ve done both) isn’t for the weak or slow. You have to be on your game and make sure everything is prepared in time. You have to know how to do your stuff and do it well under pressure (again, a lesson learned from my Job Corps days). It also helps that you have others around you who can work as a team and also know what they’re doing. If you feel you can’t handle this, then don’t read and wait until the next entry. If, however, you are a seasoned Thanksgiving kitchen veteran or feel that you can handle it, then read on.

I’d like to thank the good people at Cook’s Illustrated, the writers of all those recipe books I poured through, and my Basic and Advanced Culinary Arts instructors who taught me well, as all my tips will be from these sources and it’s only fair to give them credit.

First up, the turkey:

This isn’t like the roast chicken you can make for Sunday dinner and use the leftovers for chicken salad sandwiches and feeding the outside cats (and the indoor ones) who won’t leave you alone, despite that you’re out of dry and wet cat food. A lot of care goes into making a turkey the best anyone’s ever tasted, regardless of whether you’re serving to a large family or just you (or you and someone you love).

If you know me at all, then you’ll know that one of my major pet peeves is a dry turkey. Everything else on the Thanksgiving menu can be five-star, but if the turkey is dry, then that’s a major flaw to me. Part of the reason is because I have that need for everything to be right. Then there’s the fact that I want to show others that the two years of learning culinary arts at Job Corps weren’t a waste, even if I never get a job in that field (I can show my support for farmers’ markets, sustainable agriculture, local growers, fair trade, and talented people who want to go to school to be five-star chefs, but don’t have the money or don’t know what to do to reach that goal, though), and the fact that I always get the hiccups whenever I eat dry turkey.

So, if this is your first time roasting turkey and you’ve been racking your brain on how to make that turkey moist, stop racking and start taking notes.

Let’s start off with why your turkey would end up dry. The most common reasons are either: (a) you overcooked the bird, or (b) you made a mistake in how it was prepared or while it was roasting in the oven.

First, you need the right equipment:

a roasting pan three inches deep or less and a rack for even roasting. 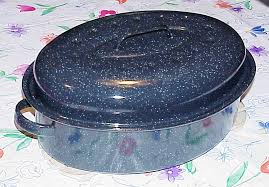 This one has been with my family for years. We don’t have an inside-the-pan rack for it, but the turkey still comes out okay. The ones with the rack inside like this one… …are good if you’re planning on turning the pan drippings into homemade gravy (which is simply your pan drippings, plus a flour/oil mix called a roux and some whipping cream if you want it smoother or have to stretch it).
Which leads me to my next secret to juicy turkey: your mirepoix (pronounced “mere-pwah,” named for a French field marshal and Louis XV’s ambassador, Charles-Pierre-Gaston François de Lévis, duc de Lévis-Mirepoix). “Mirepoix” is just a fancy name for the aromatic vegetables cooks chop up to flavor soups, stews, sauces, and roasted meats. It goes by various names, such as “sofrito” in Spanish, “refogado” in Portuguese, “Suppengrün” in German, “the holy trinity” in Creole and Cajun cooking, or “włoszczyzna” in Polish. A common mirepoix is made up of 2 parts onions for every one part of celery and one part of carrots (though you can also add or substitute for other aromatic vegetables, like leeks, parsnips, celeriac, bell peppers, garlic, or tomatoes). What you want to do is chop your aromatic veggies into medium to large chunks (depending on how big the turkey is) and spread the chunks out on the bottom of the pan, creating a flat surface.
But the mirepoix can’t make the turkey juicy alone. You need to season the bird all over — including the inside cavity. Salt and pepper are your go-to guys, but you can use any seasoning you want. Most of the time, I’m a kitchen-sink seasoner when it comes to roasting poultry  (meaning, “I use everything but the kitchen sink”), but you (and I) have a special blend when it comes to turkey. A nice dry rub I like to use for poultry is salt, pepper, a whisper of cinnamon, a pinch of nutmeg, some garlic (whether fresh and crushed or dry and powdered), some white pepper, and either basil or Italian seasoning.The spice rack (or spice section of your pantry) is your oyster; use it to your advantage. Do taste tests if you must to come up with a winning combination
It also helps if you stick an apple (Granny Smith, Fuji, and Gala are good. Save your Red Delicious for apple juice, apple sauce, or good, old-fashioned, out of hand eating) in the neck cavity. It keeps it juicy and imparts a fresh, fall flavor to it when combined with the cinnamon inside the bird. Or, you could do what I did four years ago and fill the cavity with dried cherries and fresh orange slices. It surprisingly came out good, but it imparted a very sweet taste to it that even I couldn’t handle.
Stuffing the bird also keeps it moist, but only if it’s a moist stuffing (read: it has broth/stock in it).
And last, but not least, some “dos” and “don’ts” for roasting your turkey:

In the next post, we’ll go through the side dishes, sauces, and biscuits. See you then, and happy eating!

My Tweets
Down with Jack Scalfani

Dedicated to exposing the ugly underbelly of self-proclaimed foodie and nicest guy on YouTube, Jack Scalfani.

4 out of 5 dentists recommend this WordPress.com site

A collection of bad photos from the MLS

Seeing, feeling and exploring places and cultures of the world

The culinary adventures of a hungry African

An episode-by-episode retrospective of a truly cromulent show

The World Association of Montyphiles

Vegan & Vegetarian recipes from around the world

Insightful Analysis and Commentary for U.S. and Global Equity Investors